Everything You Need to Know About Succulents 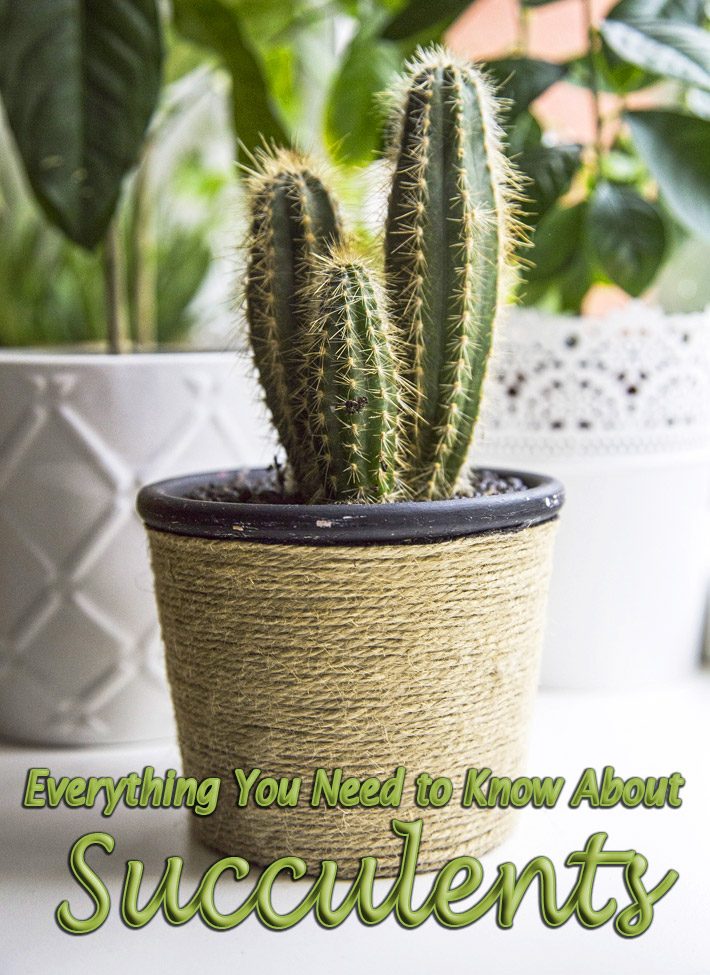 No matter where you live, there are indoor or outdoor varieties you can rely on. If you’re on a mission to find the perfect plant to grow in your home or garden, chances are you’ll find it in the succulent section of your favorite plant nursery.

What other type of plant has this many positive attributes?

“You’ll only have about 20,000 choices,” said Joe Clements, arboretum manager at Pitzer College in Claremont, California, where the Cactus and Succulent Society of America recently held its annual meeting. This very large plant family includes varieties that range from hardy types that will survive winter freezes to tropical ones that work well outdoors in warm climates and can be overwintered in pots indoors in regions where the temperature begins to plummet in the fall. There are kinds that do well in full sun and others that prefer shade. In other words, there are succulents for all types of growing conditions.

What is a succulent? While such diversity in so large a plant group sounds great, you might be wondering exactly what to look for when you go to the nursery. That’s not as simple as it might sound. Botanists don’t agree on the definition of a succulent.

One thing they do agree on is that succulents are much more than cactus. Perhaps that’s why succulent growers are fond of this saying: All cactus are succulents but not all succulents are cactus. To keep it simple, perhaps the best way to think of succulents is to think of them as plants that store water in their tissues.

How to decide what’s hardy

With that thought in mind, perhaps the best way to decide which succulents to grow is to divide them into two main types:

Hardy comes with an asterisk of sorts — be sure to choose succulents for the landscape based on their hardiness for your USDA zone. There are several ways to determine which ones will make it through the winter where you live. One way is to visit your local nursery or the plant section of a box store and ask the people working there. They can advise you about which of the succulents can go in the landscape and which should be grown in pots. They can also tell you the lowest temperatures the varieties can tolerate.

Another source of information would be an affiliate CSSA club near you. Club members could also share tips and tricks on various aspects of succulent culture in your area that they’ve learned through trial and error.

Growing succulents in the landscape

Once you’ve got your plants home, if you’re going to plant them in the garden, you need to do it right, said Clements. By “right,” he means to create a succulent garden or add them to your garden using the same principles as an English garden.

A way to achieve a natural-looking succulent garden is to create a rockery. Rockeries — sections of the garden landscaped with rocks of various sizes — are especially effective on slopes or terraced areas where they help that area become a focal point in the landscape. In the case of succulents, this also mimics many of their native habitats.

Creating an English garden look simply means to plant succulents in groups or plant communities so they have a natural look in the landscape.

“Don’t put one here and one there,” Clements advised. He calls that “creating soldiers.” Another mistake home gardeners often make is planting in rows, which leads to a boring look in the landscape. Because virtually all succulents prefer well-draining soils, it’s a good idea to mix sand and gravel into native soils if you don’t have well-draining soil in your garden, advises Amanda Campbell, manager of display gardens at the Atlanta Botanical Garden, which has an extensive indoor and outdoor succulent collection.

“Some can go for days and weeks without water, but some prefer more regular moisture,” she added. “But, despite their moisture preferences, none like standing water against their crowns or for soil to stay too wet for very long.” That’s where the well-draining soil comes into play, she said. You can water normally, even onto the crowns, and the proper soil for succulents will wick the water away.

“Now that watering restrictions are more widespread on the West Coast, perhaps succulents will become a more popular plant for the landscape!” Campbell said. A good pot-soil combination for growing succulents in containers is to choose a porous terra cotta pot and a soil mix that will drain quickly. A general mix that works well for many succulents is one that combines one part of organic matter with one part of sand or a gritty medium.

Perhaps the biggest danger in growing succulents, especially in pots, is loving them too much — gardening code words for overwatering. “Both indoors and outdoors, succulents actually require little care and water,” said Campbell. “At most, folks might want to prune them back or take cuttings to propagate.”

Succulents are also ideal for pots and over wintering indoors because they can easily adapt to the dry humidity and lower light found in most homes.

Succulents are generally pest resistant, Campbell said. When there are problems, the main outdoor pests tend to be scale and aphids with inside pests usually being fungus gnats, mealybugs, woolly aphids and, maybe, spider mites, she explained.

The box stores commonly sell yucca, opuntia and the occasional agave, at least “occasional” in the Southeast, in the outdoor section, Campbell said. These and other succulents give beauty to home landscapes, Campbell said, because they can be planted as a specimen plant or as an entire landscape. “They are structural, regal, and, in my opinion, defiant plants.

“Yuccas are by far the most common succulent for outdoor landscapes,” Campbell said. “There are some yucca and agaves, specifically Agave harvardiana, that are hardy from the Southeast through the Northeast, though maybe not as far up as Maine.” Hens-and-chicks (Sempervivum tectorum or Echeveria elegans), which get their names from mother plants (hens) that produce clusters of identical offsets (chicks), are popular and easy plants for a sunny spot in the garden. They can also be grown as houseplants, but when grown this way should be allowed to dry out between waterings. Overwatering will cause the plants to rot. They can also be easily propagated by removing the “chicks” from the “hen” and potting the chicks up or moving them around in the garden.

Sedums, sometimes sold under the name stonecrop, are another succulent that are common in the retail trade. “Some are bred for normal garden conditions, but some are particularly happy in the drier situations succulents thrive in,” Campbell said. Sedum ‘Blue Spruce’, Sedum tetractinum, and Sedum sexangulare are among those that can take dry conditions, although, there are many others. “The bigger, more upright varieties are the ones that typically like a bit more water,” Campbell advised. “And many sedums will take partial shade with no complaints.”

“For indoor starter plants, you can’t go wrong with Jade plant (Crassula ovata),” Campbell said. “It’s a classic and easy to grow.” Two other indoor plants she recommended are Euphorbia tirucalli, and aloes, which are especially easy.

Aloe vera is always a popular choice. It is known as the medicine plant because its sap has been used for centuries to treat wounds and sunburn. Ironically, it has sharp edges that can cut the skin of passersby, so be sure to place it where people won’t brush up against it.

“At least in the Southeast and probably in the Northeast, too, most of these can be grown outdoors in the summer on a patio and brought in for the winter,” Campbell said.

Two euphorbias that the box stores commonly sell in their indoor area are Euphorbia psuedocactus and Euphorbia milii, also known as crown of thorns. Another general reminder, Campbell said, is that the sap of any of the euphorbiaceae can be irritating to people.

The box stores also sell various aloe, echinocactus and ferocactus pretty regularly in their greenhouse, Campbell said. “Sometimes, even in the southwest and on the West Coast they sell these indoors even though they are hardy outdoors in these regions of the country.

Burro’s tail (Sedum morganianum), also does well indoors. It is especially attractive when planted in a hanging basket because it’s overlapping gray-green or gray-blue leaves can grow up to three feet long. Give it medium to high light for it to grow well. 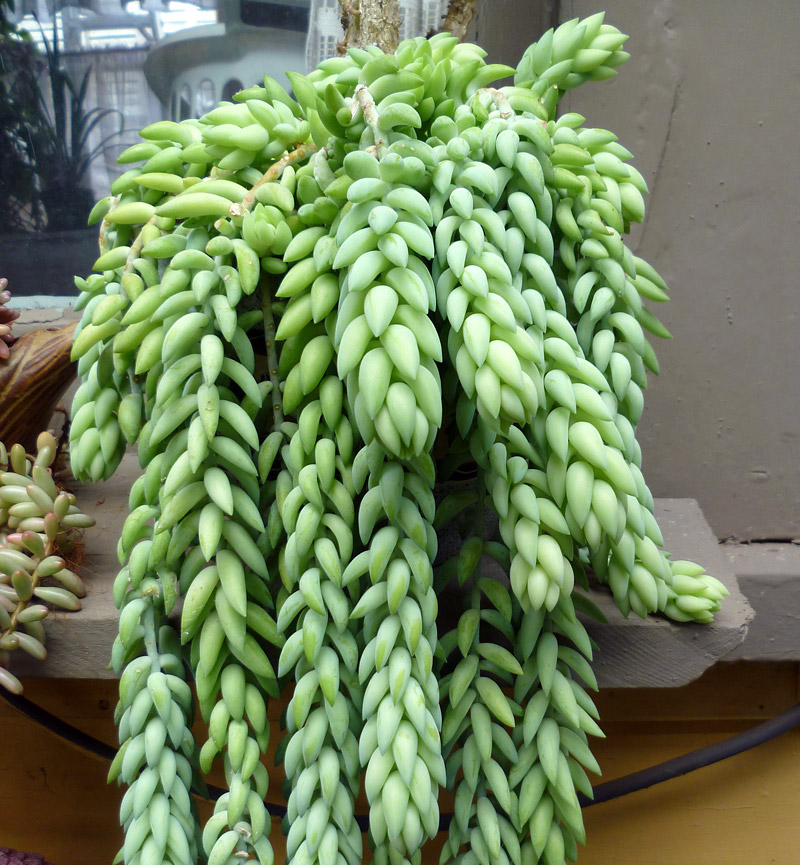 Christmas cactus (Schlumbergera x buckleyi) is a popular succulent because it blooms during the holidays. You can grow it outdoors in the summer in a shaded spot. To maximize blooms, allow it to remain outdoors in a sheltered area until night temperatures drop to the upper 40s Fahrenheit in the fall. Fertilizing three times in summer using a 10-30-10 fertilizer and cool fall nights will promote flowers. Keep it drier in the winter than in the spring or summer, but don’t let it dehydrate or you’ll risk having flower buds fall off the plant.

Finally no story about succulents would be complete without including Sansevieria trifasciata, commonly called Snake plant (because of the shape of the leaves) or Mother-in-law’s tongue (because of their sharpness). If there is an indestructible houseplant, this is it. In addition to its carefree qualities, it is also popular because its strongly upright growth habit will fit into many locations in any home. It’s bold but clean lines fit traditional or modern home architecture and there are numerous varieties with different variegated patterns that add options for visual interest. What’s not to like about a plant — or even a plant family — that even the most black-thumbed gardener would have a hard time killing? 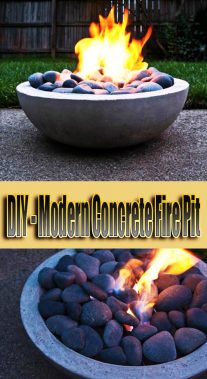 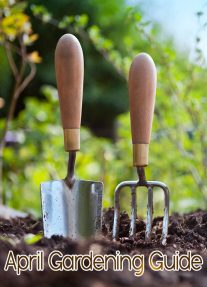