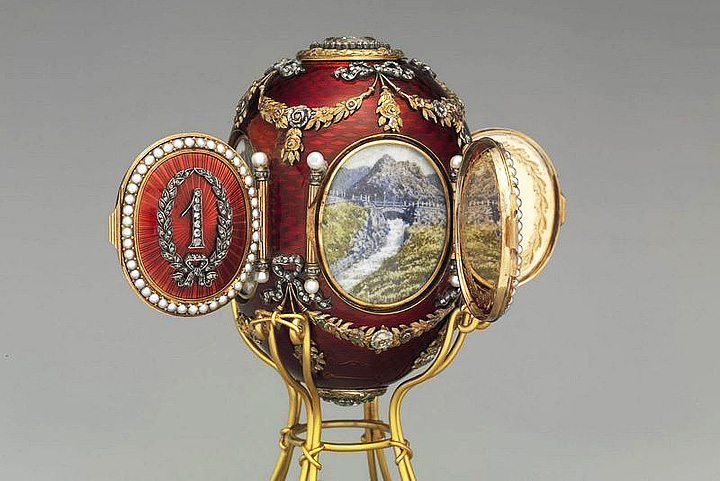 Easter is the most joyful celebration of the Orthodox faith in Russia… After the devout church services, families gather to exchange gifts of decorated eggs, symbols of renewed life and hope.

The Easter of 1885 also marks the twentieth anniversary of Czar Alexander III and Czarina Maria Fedorovna, and the Czar needs an exceptional gift for his wife. So he places an order with a young jeweler, Peter Carl Fabergé, whose beautiful creations have recently caught Maria’s eye. On Easter morning, Fabergé delivers to the palace what appears to be a simple enameled egg. But to the delight of the Empress, inside is a golden yolk; within the yolk is a golden hen; and concealed within the hen is a diamond miniature of the royal crown and a tiny ruby egg – both now lost to history.

His wife’s delight is all the Czar needs to reward Fabergé with a commission for an Easter egg every year. The requirements are straightforward: each egg must be unique, and each must contain a suitable surprise for the Empress. With consummate craftsmanship and an inventive spirit, Fabergé repeatedly meets the challenge, borrowing inspiration from the gilded lives of the Czar and Czarina. In October of 1894 the Czar’s health fails. He dies suddenly in the prime of life, and his son, Nicholas II, unwillingly ascends the throne.

Nicholas’ rigid adherence to convention applies as deliberately to the established customs within the court and family as to the affairs of state. “And of course, the Easter eggs was a tradition that was started by his father, and Nicholas decided to carry it on,” adds Proler. Czar Nicholas orders the continuation of the annual commission of a Fabergé Easter egg for his mother and adds a second order to be delivered to his new wife, Czarina Alexandra Fedorovna. So imaginatively conceived and opulently executed, Fabergé’s work elevates jewelry to a decorative art unequaled since the Renaissance. At the 1900 World Exhibition in Paris, the Imperial eggs are shown in public for the first time. They astound the jury, which showers him with honors, and Fabergé’s fame spreads throughout Europe.

The novelty of combining artistic excellence with functional value – and a touch of whimsy – so captures the imagination of the aristocracy that the Fabergé workshops are flooded with commissions, transforming an ordinary goldsmith shop into the famous “House of Fabergé.” But though aristocrats, barons of industry, kings and queens alike all cross his threshold seeking gifts, Fabergé’s first duty is always to the Czar.

The Renaissance egg, 1894. It was the last egg that Alexander presented to Maria.

Year by year, Fabergé’s Imperial Easter eggs reach new heights of invention and extravagance, expressions in miniature of the life of imperial privilege.

According to author and Fabergé expert, Géza von Habsburg, “They are the absolute summit of craftsmanship. They are unbelievably made. They were the sort of apogee of what Fabergé was able to do, and he lavished everything he could on them.”

Ultimately, these eggs would become painful reminders of the tragic events to come.

All the elements of the Romanov story come together most elegantly in the Fifteenth Anniversary egg (1911), a family album just over five-inches-tall. Exquisitely detailed paintings depict the most notable events of the reign of Nicholas II and each of the family members. “Not only is it a staggering tour-de-force of the jeweler’s art,” says Forbes, “but probably more than any other egg, it is the one most intimately associated with the whole tragedy of Nicholas and Alexandra and that incredibly beautiful family. There are these five children – all these sort of glamorous events surrounding their lives – and there they are looking out at us happily unknowing what was going to happen to them just a few years later.” During the first months of Russia’s involvement in World War I, the simmering discontent of the troubled nation is cooled by patriotic unity in defense of the motherland. But the Russia’s dismal economic conditions make it impossible for Nicholas to sustain the war effort against powerful, industrialized Germany. By 1917, famine threatens the country. Riots and strikes demanding bread are commonplace in Moscow and St. Petersburg. When the Imperial troops join the demonstrators, the government collapses to the revolution. On March 15th, with neither the support of the people nor the aristocracy, Nicholas is forced to abdicate.

The next day, a decree is passed ordering the arrest of Nicholas II and all other members of the Romanov family. The Czar and his family are eventually removed to Siberia where they are held captive for over a year. In the chilly pre-dawn hours of July 17th, 1918, Nicholas and Alexandra, with their five children – Olga, Tatiana, Maria, Anastasia and Alexei – are herded into a basement and executed. Of the immediate family, only Nicholas’ mother, the Dowager Empress Maria Fedorovna, escapes the assassin’s bullet. As she makes a hasty departure from her homeland, she brings with her the Order of St. George egg, the last Fabergé Imperial Easter egg she will ever receive from her son Nicholas, once Czar of all the Russias.

In the harsh light of historical hindsight, the Fabergé Imperial Easter eggs can be seen as nothing more than the frivolous indulgences of a decadent monarchy. But stripped of revolutionary ideology, they endure simply as fragile mementos of the doomed Russian dynasty, each not only an artistic masterpiece, but a remarkable reflection of the joys and achievements of a family at the crossroads of history.

No other goldsmith or jeweler could match the lavish and detailed designs. Over a century later, Fabergé eggs remain the benchmark for quality and wealth in the jewelry industry. This ‘Vampire’ Hedgehog Is Instagram’s Newest Star 6 years ago

NASA: Last Month Was Warmest April Ever Recorded 6 years ago