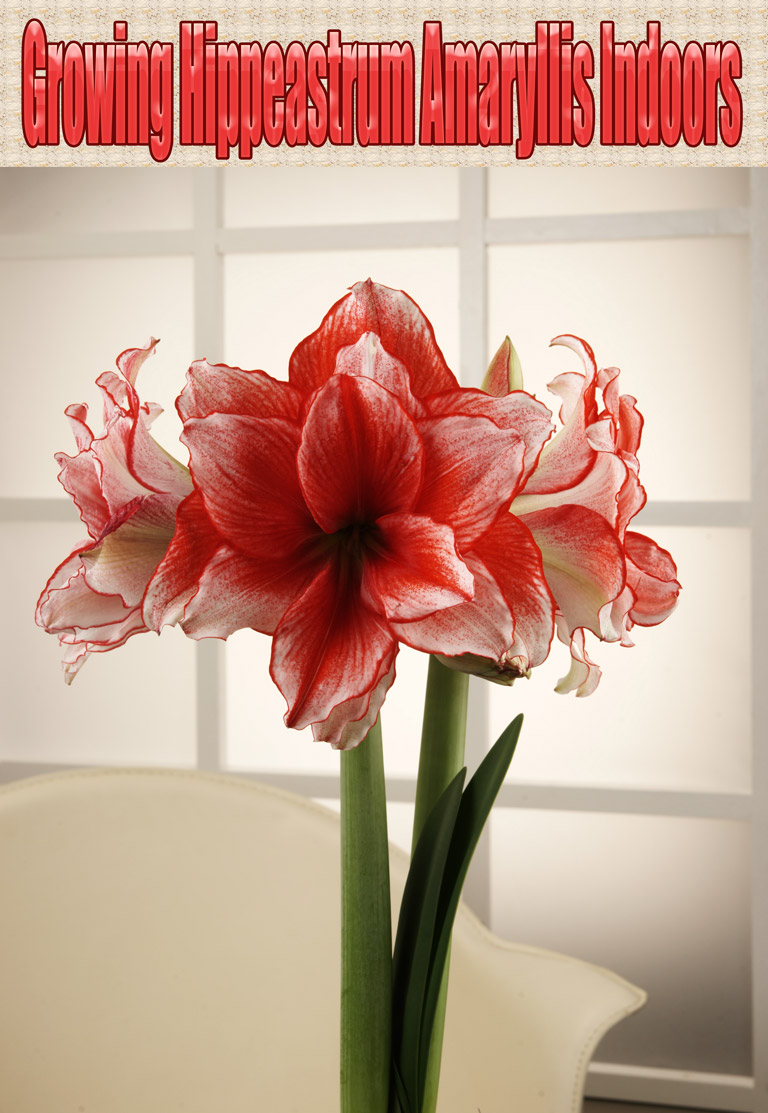 Amaryllis hippeastrum are bulb flowering type plants that produce a cluster of attractive trumpet like flowers in different color variation.

Some confusion over the years has occurred between the hippeastrum and amaryllis when both are actually a separate genus. The amaryllis talked about on this page are actually hippeastrum bulbous plants. Amaryllis is the common name for these plants, however, it is also the genus for another type of bulb from the same family (Amaryllidaceae) native to South Africa.

The main characteristics when looking for the differences between these is the Amaryllis (from the genus) has no leaves during flowering time, solid stems, and produces 6 -12 flowers, while the hippeastrum (amaryllis used for the common name) produces leaves after flowering, has hollow stems and blooms 3 – 6 flowers. Species and hybrids: There are close to 100 hippeastrum species and who knows how many hybrids are available now. Most that are sold are likely to be a hybrids which are usually bought during fall, ready for blooming during the winter months.

Foliage: The hippeastrum produces one or two stalks that grow up to 30 in tall and fairly wide light green leaves. The strap like leaves which grow up to 18 inches long usually arrive during or just after flowering. Once the flowers and stalk begin to die and they’re cut away it can look quite unattractive. Flowering: The flowers usually bloom during winter or spring (after 6 -10 weeks of the bulb being planted) and display clusters of trumpet looking flowers in various colors (red, orange, pink, and striped or shaded). These decorative flowers need to be cut away with the stalk once they begin to fade.

Care after the flowering period

After the flowering period the stalks will start sagging which need to be cut away with the flowers (as close to the bulb as possible) and just keep the leaves. For the next six weeks a grower needs to fertilize and water the hippeastrum frequently (as normal) to encourage growth for the next growing season. You may need to support the leaves when they have grown large by tying them to a bamboo stick, otherwise they just hang over the pot – looking very unattractive.

When the leaves begin to turn yellow at the beginning of fall it’s now time to prune them back so they’re only 2 inches long. If the plant has grown outside a grower would remove the bulb from it’s soil to prevent frost killing it and store the bulb in a cool room.

From September place the plant pot in a cool spot (approximately 55°f – 13°c), reduce watering and stop fertilizing the soil for 8 to 10 weeks. After this 8 – 10 week period – begin watering once the soil becomes dry to the touch and fertilize once every two weeks. You can now expect new growth and flowers during winter. Note: Many buyers of this plant just throw the plant away after flowering. However, for those willing to offer some care and attention they can see them bloom for future seasons.

Poisonous for pets: Toxic to cats and dogs.

Thanks for sharing this!
← DIY – Garden Love Seat
40 Interesting Facts About Tattoos →