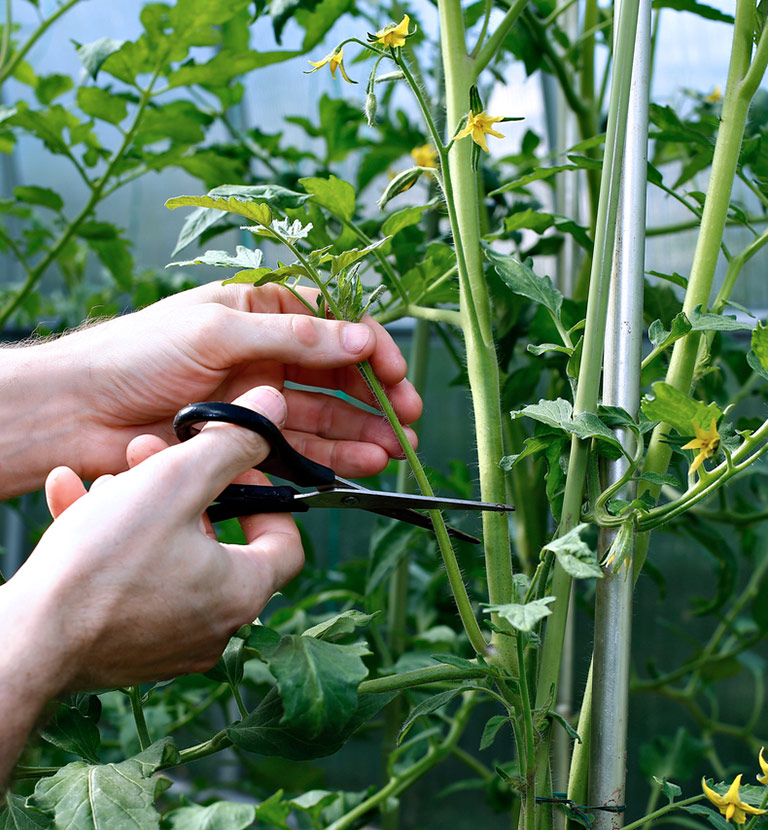 A local gardening group was touring a greenhouse operation that grew tomatoes. The tour guide told the visitors that they removed the lower leaves from the plants because “they robbed nutrients from the upper part of the plant that was producing fruit”. In short, removing lower leaves resulted in a better harvest. It is unclear if that means larger tomatoes or more tomatoes.

Some home gardeners remove lower leaves believing that they will get a better harvest. Others don’t bother and claim they get a good harvest without the extra effort. Who is right?

After doing some significant research I can honestly conclude that the issue is as clear as mud – but an answer is emerging – read on.


If the lower leaves are using NPK, then it means the leaves are photosynthesizing and therefore producing sugars. Rather than being a drain on the plant this would seem to be helping the plant.

As leaves die they return most unused NPK back to the plant. Lower leaves will therefore not be robbing the plant of these kinds of nutrients.

It is more likely that the tour guide used the wrong term; instead of ‘nutrients’ they meant to say ‘sugars’. If the lower leaves are no longer carrying out photosynthesis effectively they can become a sugar drain on the plant. In this case the upper leaves would have to make enough sugars for both fruit production and for maintaining the lower leaves.

Let’s first have a look at the growth of tomatoes in greenhouses. Greenhouses grow mostly indeterminate varieties which keep growing taller and taller. As they grow they continue to produce new fruit clusters.

In greenhouse production (at least in Ontario, Canada) it is common to allow each plant to hold 15-18 leaves which supports 5-6 fruit clusters. This gives a 3:1 ratio of leaves to fruit cluster.  A single plant can be grown for 9 months and can reach 50 ft in length. Imagine the ‘module’ of 15-18 leaves slowly moving up from the root system as the plant grows.

Lower leaves are removed to maintain the 15-18 leaf module for two reasons.

The first reason has to do with disease. As plants grow taller, the lower levels of the greenhouse become more humid, increasing the possibility of disease. By removing the bottom leaves the greenhouse operation keeps the floor area cleaner and reduces the risk of disease. The second reason has to do with available light. As the plant grows, the upper leaves start to shade the lower leaves. With less available light, the lower leaves can reach a point where they draw more sugars from the plant, than they can produce themselves, having a negative impact on fruit production. Greenhouses maximize their growing space and plant as close together as they can. To prevent any impact on production due to a loss of light, they remove lower leaves.

The above information was obtained from Dr. Barry Micallef, University of Guelph, who specializes in plant nutrition and greenhouse operations. Other references indicate different ratios of leaves to fruit clusters. For example, the Alberta government recommends a 1:1 leaf to tomato cluster ratio and a study in Brazil found that a ratio of 3:2 produced the best yields.The ratio does depend on the variety being grown and may also depend on other cultural conditions.

The University of Arizona report on growing tomatoes says the following. Keep in mind that Arizona is hotter, and sunnier than most of North America.

“Some growers prefer to shade tomatoes, while others do not. Theoretically, shading will reduce photosynthesis, and therefore total yield, however, this has not always been shown in controlled studies. In fact, in some studies, total yield was improved using 30% shadecloth. Shading can improve fruit quality, since direct sunlight on fruit can cause yellow or green shoulders, cracking, and russeting. Alternatively, older leaves can be left in place to shade the individual fruit trusses. In areas of high summer temperatures and humidity, shading may be necessary to keep temperatures within a reasonable range.”

Removal of lower leaves does seem to be the common practice in greenhouse production.

Growing Tomatoes in the Home Garden

Home gardeners grow both determinate and indeterminate varieties of tomatoes, and these may need to be treated differently.

Determinate tomatoes are genetically programed to only grow to a certain size and they rarely get large enough to have a module of 18 leaves and 5-6 fruit clusters before they stop growing. The lower leaves of these types of tomatoes never need to be removed to maximize yield.

The size of indeterminate plants will depend on where they are grown. A long growing season will produce taller plants. In northern climates we struggle just to get the plants producing fruit before the first frost. The plants never get very tall here and therefore it is not necessary to remove lower leaves to maximize yield. In warm climates where you can grow tomatoes outside for much of the year, it might be beneficial to remove lower leaves once you have 18 leaves but this depends on how close together you plant. If your plants are grown with adequate space between them, light will reach the lower leaves and they don’t have to be removed. When lower leaves start getting yellow it is a sign that they are shutting down and they should be removed before they become a sugar drain on the rest of the plant. As long as they are green they are photosynthesizing and producing sugars for fruit production.

In the last few paragraphs I talked only about fruit production. What about disease control? The common advice for gardeners is that they should remove lower leaves so that soil borne diseases are not splashed up onto plant leaves. This certainly seems to make sense – but is it true?

A number of diseases are not spread by splashing water. Fusarium wilt and verticillium wilt are both fungal infections that take place at the root level, not on the plant itself. Late blight can only live on living tissue and so does not overwinter under ground. However a few diseases can be spread from soil to a plant with splashing water, early blight and anthracnose being examples.


Cleaning up remaining plant material in the fall is the best way to prevent diseases next year. Adding a good mulch is also effective since it prevents diseases from being transmitted from soil to the leaves. In fall you should also remove the mulch along with old plant material – you can’t really separate the two.

Another way to prevent diseases from the soil is to remove the lower couple of leaves. Splashing water from the soil will not rise up too far, so removing a couple of leaves can be effective to prevent some diseases. If these leaves are removed too soon, it will delay the production of the first fruit cluster because the plant needs a certain amount of excess sugar built up before it starts to fruit. My experience is that the wilts  and early blight infect the plants, but don’t interfere significantly with the harvest. Keep in mind I am in a northern climate, zone 5, and I don’t grow heirlooms – yet. Late blight just kills the plants so quickly that removing leaves once you see the disease will make no difference. I rarely remove the lower leaves.

For the purpose of fruit production there seems to be no benefit in removing the bottom leaves in the home garden so long as the lower leaves are still green and getting enough light. Once they yellow remove them. If disease is a problem for you, there is a benefit to removing the lower leaves to combat diseases that are splashed up from the soil.

Thanks for sharing this!
← 5 Energizing Drinks Healthier Than Coffee
Castlecrag House by Greenbox Architecture →