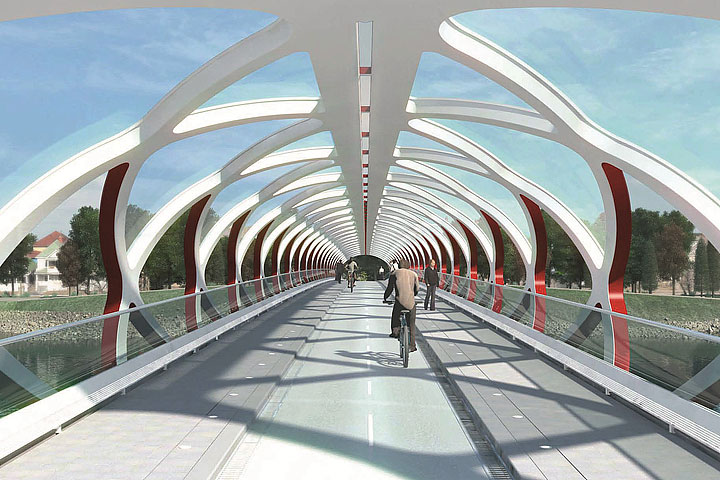 These bridges all have something in common: bold and forward-thinking design!

In a century that is seeing skyscrapers pushing vertical limits and 3-D printing transforming both design and engineering, it’s easy to look past the innovative bridges being built across the globe. Although their function—getting passengers from one point to another—may be mundane, the structures that are designed for that purpose are oftentimes anything but ordinary.

From Zaha Hadid’s Danjiang Bridge spanning the Tamsui River in Taiwan to the Garden Bridge over London’s Thames by Thomas Weatherwick, A&D covers five of the most ambitious and innovative bridges being built around the world right now. Photography courtesy of Next Architects

Located in Changsha, China, the Lucky Knot Bridge by Next Architects is a 607-foot-long structure that’s undulating pathways were inspired by ancient Chinese folk art. The bridge is set to open in late 2016. When completed in late 2018, Thomas Weatherwick’s Garden Bridge will span 1,201 feet across the Thames River in central London. Rich with foliage, the pedestrian-only bridge will cost roughly $275 million. On the coastal city of Køge, Denmark, the Køge North Station by COBE Architects will be a 738-foot-long pedestrian bridge that spans (and allows access to) high-speed trains, local trains, and the busiest motorway in Denmark. When completed in 2018, the bridge will provide a stunning 180 degrees panoramic view over the landscape and traffic lanes. The 3,018-foot-long, cable-stayed Danjiang Bridge, designed by the late Zaha Hadid, will cross the Tamsui River in Taipei, Taiwan. When completed in 2020, the structure will be the longest asymmetrical cable-stayed bridge in the world.

05. The Nine Elms to Pimlico Bridge Spanning the Thames in south London, was selected through a competition including 74 entries from 16 countries. The Danish firm Bystrup Architecture won the bid with its elegant and simple design that wraps the walkway around each supporting tower.

The structure, when completed in the coming years, will be central London’s first car-free bridge for cyclists and pedestrians.

Thanks for sharing this!
← Mesclun and Salad Greens
Turmeric – The Healthiest Plant on Earth →