Top 10 Most Expensive Champagnes in the World 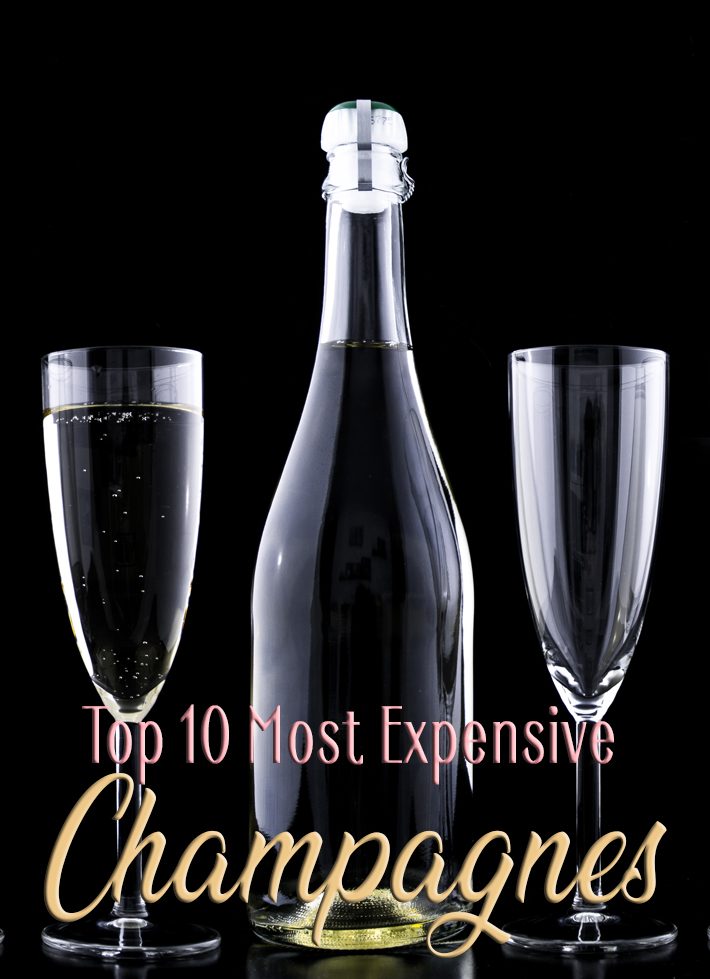 When it comes to champagnes, the words that stroll inside our head would be ‘sophistication’, ‘class’, ‘elite’, and so on. Champagnes are luxury drinks, which can be afforded only by the affluent section of the society. Its association with the royal families has given it its own class and panache. Champagnes were primarily produced for the royal families, but now, they are available at every corner of the world. It is actually sparkling wine which is manufactured using the grapes grown in calculated atmospheric conditions.

France is the homeland of champagnes, giving it the stature of being called as the ‘Champagne region’. Each famous champagne is produced using a special variety of grape grown in a specific environment in a premeditated way, hence making its price sky-rocketing. Champagne is a symbol of royalty, opulence and nobility.

When we have a look at the champagne bottles, then it is clear from its extravagant looks and presentation that it was worth spending all those bucks. For the rich, it is a prized possession and a badge of their superiority. Its limited nature is the reason why the prices are going over the top.

Top 10 Most Expensive Champagnes in the World Drappier is an eminent champagne house, which formulated the brand Boërl & Kroff. It is believed that Michel Drappier picked up the best quality berries for this brand. With stunning looks and a magical appeal, it is one of the most exceptionally elegant and finesse driven champagnes. The quality is top notch. Apparently, it is produced from the grape juice taken out from the first press. Priced heavily at $ 2,489, it is one of the most expensive champagnes in the entire world. The fancy looks and its flamboyance will clearly indicate that this bottle is not made for just anyone. It is manufactured by the Krug champagne connoisseurs, which is owned by a company run by Louis Vuitton and Moët Hennessy! It is a classy red sparkling wine, which is made using Pinor Noir grapes, giving it a very posh look. The Krug Clos d’Ambonnay has a charm, which has attracted every wine lover towards it and kept on adding its number of followers. As a result, it comes with a designer price tag too, with a single bottle pricing up to $ 3,500! A bottle of Dom Perignon Charles and Diana 1961 warrants a high price of $ 4,309. It is produced by the legendary house of Moet and Chandon. It is the drink of the royalty. At the royal wedding of Prince Charles and Princess Diana in the year 1981, Dom Perignon was given the esteemed title of ‘official champagne’. It was released the year Princess Diana was born, that is 1961. Magnums of Dom Perignon Vintage 1961 were chosen and served, each pertaining to special labels, specially designed for this auspicious occasion. Some years later, a very limited number of bottles were released as commemorative items, and only a few got their hands on such a valuable fragment of royal history. Next up is Perrier-Jouet Champagne. It is a pure beauty to look at. Puts you in a tough situation, whether to keep admiring it or actually opening it up and taking a sip of this delicious heavenly drink. Once you taste this mouth- watering drink, it will soothe your tongue for hours. Its specialty is that it is made by using the best variety of grapes, and created using the flavors from vintage liquors, which gives it a nice fruity tang. It comes in a set of 12 bottles which is sold by Perrier Jouet Champagne, a well-reputed brand company. To catch your hands on this, you will have to part with 6,485 USD. Are you up for it? Champagne Cristal Brut, bottled in 1990 is famous worldwide with its name ‘Methuselah’. It is one of the big- ticket champagnes, with each bottle costing up to a whopping $ 17,625! The reason for this is the fact that only a restricted number of bottles were produced and sold, hence bumping up the price. Its elegance and class is commendable, which makes it worth the big bucks. Its refined taste will touch your soul. The bottle has an exquisite gold label which adds to its glamour and provides a royal vintage touch. If you can afford to buy this champagne, then, as an investment, it would make a great piece of vintage item whose value will only grow with progressive years. With a rather misleading name, the first bottle of sparkling wine, i.e. Krug 1928 was manufactured in 1938, using grapes grown as far back as 1926! Naturally, the flavor would be divine and highly matured. It is very soothing with a magical taste. Also, with each passing year, the taste enhances exponentially. It has managed to please the generations with its superb and extraordinary taste, and will continue to do so. Dom Perignon White Gold Jeroboam is placed at the number four in the countdown. In 2005, at a particular auction, one bottle of Dom Perignon White Gold Jeroboam sold for an unbelievable amount of $40,000! This is one of the most stylish, exotic and splendid bottle of champagne. It has a heavenly taste, and compels you to drink more and finish the entire thing in one go. With a classy, ravishing look, it is one of the most expensive bottles to have in possession and is truly a masterpiece. With an implausible amount of $50,000, Pernod Ricard Perrier Jouet champagne comes in a pack of 12. The special feature of this champagne is that you can have it personalized! The liquors that are used in it can be made to suit your own personal taste, which is why it is loved all over the world. Pernod Ricard Perrier Jouet is out of the ordinary. It guarantees you to an experience of a lifetime. When you have a sip of it, it will blow your mind. If you are one of the very exceedingly rare people who can afford this magnificent drink, then consider yourself the luckiest in the world. The next in the list is Shipwrecked 1907 Heidsieck. This champagne has an intriguing and fascinating story behind it. It is believed that during World War 2, a ship took sail towards Russia, however due to a clash with the Germans, it sank under the sea. Later on, in 1997, this ship was rediscovered, along with 200 bottles of champagne lying untouched! This champagne is one of the most beloved one among wine lovers, with an impeccable taste and vintage look. Due to its limited numbers, and an interesting background story, each bottle is now sold for an eye- watering amount of $275,000. The first position in this list is taken up by Goût de Diamants! Yes, it actually costs $2.07. Clearly, the most expensive champagne, Goût de Diamants is one of the newest brands in the market. It is not just an exquisite bottle inside, but has an equally exquisite outside decor too. Brought out in 2013 by Shammi Shinh, founder of Prodiguer Brands, each bottle has a striking black color, with a silver label similar to Superman’s logo. Each bottle is adorned with a large, glittery, expertly cut Swarovski crystal! Being exceptionally rare, it is of immense value. So all the champagne lovers out there, do keep an eye on these, and if God has blessed you enough with pocket loads of money, then this is your jam.

Russia Completely Ban GMO In All Food Production 6 years ago

Bathing Suit Cleans Polluted Water as You Swim 7 years ago

Prophix: Hi-tech Video Toothbrush 6 years ago
← Pumpkin Carving 101
How to Stick With Exercise →