25 Most Intelligent Animals On Earth 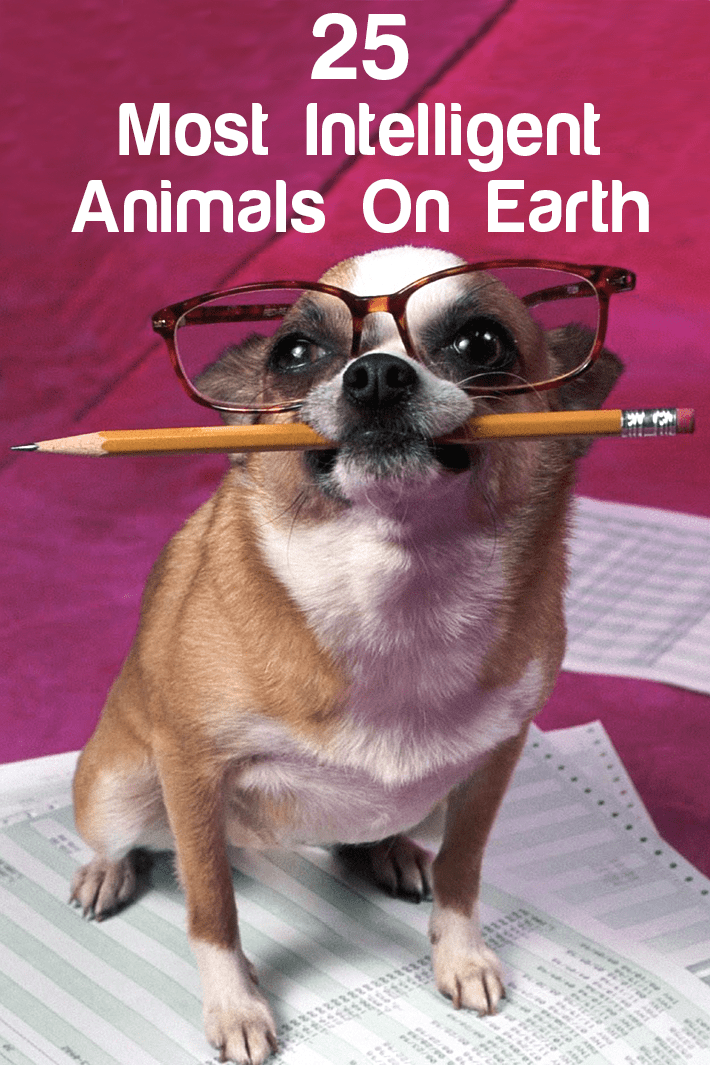 Although most people wouldn’t typically associate extreme intelligence with animals, that is a bit of a misconception. While they are obviously not able to match the computational and meta cognitive power of the human brain there are certain things some animals specialize in for which their minds are uniquely adapted. In some ways you could say they are smarter (or more functional) than even humans at performing these tasks. These are the 25 most intelligent animals on Earth. Squids are said to be among the brainiest invertebrates in the world. Their brain structure is different from other invertebrates in the ocean, as they share complex features similar to the human brain. Like human beings, squids can be very curious about their environment. They have the ability to learn new skills and develop the capacity to use tools that can either help them repress their boredom and protect them from harm.

Spiders are among the smallest creatures to possess a proportionately high level of  intelligence. Especially the White-Mustached Portia spiders. These spiders dwell African; Asian; and Australian forests and have demonstrated special learning skills.

Though they are small, they have the ability to creatively withstand calamities that would that would wipe another species. Ants are often seen coordinating in massive groups to build nests and hunt for food; and they accommodate to their environment very well. All notable points when it comes to measuring intelligence. Baboons are old world monkeys who have cognitive abilities very similar to chimpanzees and orangutans. In terms of the way they behave, one can see how these creatures resemble people. Unlike other animals, studies show that at some level baboons know how to identify stress and cope with it. They create extremely complex social systems and can think critically when confronted with difficult situations.

Studies have shown that sea lions possess the ability to think logically and can actually deduce if a=b and b=c, then a=c. Just like chimpanzees, the intelligence of orangutans is reflected in the way they imitate human actions. They also have the unique ability to learn complicated new skills, such as sawing wood or using a hammer and nail to put things together. Orangutans have the ability to understand their surroundings in a more abstract way than other animals so they know how to acclimate to some very harsh environments.

There’s a reason why pigeons have been used numerous times throughout history on places like battle fields .  They are extremely good at Geo location and studies have shown that they have an amazing ability to remember people and places throughout the course of their life. Along with pigeons, crows are among the most intelligent birds in the world. They have the ability to solve complicated problems and adapt to tough situations which can easilybe seen in the way they gather their food and collect resources.

Of all the animals, sheep are believed to possess the most powerful memories with some research showing them to be better than humans in certain situations. For example, they have the ability to identify when a fellow sheep is lost in their flock.  Moreover, they exhibit a wide range of emotions and response to various things going on around them which also shows a high level of intelligence. Known for being resourceful; raccoons are capable of forming complex social relationships and also make use of complex tools when problem solving

Horses have always held a special meaning to humans, apart from the fact that they are very rideable and get us places they are also teachable, have good memories, and are able to respond to complicated commands quickly under stress.

Known for having displayed suicidal tendencies and well planned attacks in a group; it’s safe to say that Rhesus Monkeys are extremely smart and resourceful. Extremely adept hunters falcons have always been used in the same way as pigeons, to convey messages and do reconnaissance.  Their ability to follow commands and remember territory is formidable.

Once could easily underestimate the mental capacity of a rat. While they can be revolting sewer dwellers that Hollywood has made them out to be, they are also quite smart. They have very good long term memories and are excellent when it comes to adapting to changing situations. Even during the time of the ancient Greeks, owls were already seen as intelligent animals. While this may appear to be true due to pre conceived notions about their “wisdom” this is the “burst your bubble” list item. That’s right, they are actually not that smart compared to other birds.  Technically they shouldn’t even be on this list but how else would we shatter everything you thought you knew?

Those who have cats as pets know that these animals are skilled at hunting. They are agile and they possess incredible sensory ability and though their not nearly as trainable as dogs, they are extremely adept at learning new skills. Squirrels may be small, but their brains should not underrated. Yes, we know what your thinking; every time you almost hit one with your car is because they can’t seem to figure out how to get out of your way, how can they be smart? Well, their intelligence is very focused on one thing; gathering food.  When it comes to storing provisions their minds are uniquely adapted with everything they need which includes a ridiculous memory to remember where they store it.

Compared to other animals, elephants have larger brains.  Of course just because your brain is big doesn’t necessarily mean much. What matters is the proportion of body mass to brain mass but even with that said elephants are really, really smart by non human standards. These animals use their brains to create and process complex social interactions and seem to even model things such as empathy. When it comes to  group of invertebrates, octopuses are known as the most intelligent. They are highly skilled hunters who use well developed strategies when finding food. And just like most of the other animals on this list they have shown the ability to solve some very complicated problems.

Although intelligence levels vary across breeds, in general they learn new skills easily and are quick to respond to human training.  Most breeds of dogs like Labrador Retrievers, Border Collies and Poodles aver very curious about their environment and can even notice a change in the smallest detail. Is what appears to be their high emotional intelligence however, that has probably led them to be man’s best friend. Known for their massive size but not often their massive intellect whales often use complex sounds to communicate with each other and coordinate their activities among the group very effectively.  They are also formidable problem solvers.

Although their famous ability to talk is pure mimicry as most people know parrots have excellent memories and like many others on this list are capable of solving relatively complex problems. When it comes to  body mass to brain ratio, it is a scientific fact that Bottlenose dolphins have among the largest brains in the animal kingdom. Characterized by their advanced communication skills, they have also been considered to be self aware with the ability to recognize themselves in a mirror.

According to research, a middle aged pig can be as smart as a three year old human being and they know how to adapt to complex environmental situations because they have the ability to learn new skills easily. Aside from the fact that chimpanzees look like humans, these animals also have the capacity in some ways to think like humans. They can manipulate their environment and utilize tools in order to help the community accomplish certain tasks.  By and large they are often considered to be the smartest primate and therefore one of the smartest animals in the world.

“Angel of the Gap” Don Ritchie 7 years ago

“The Hive” Sculpture Controlled by Actual Be 6 years ago