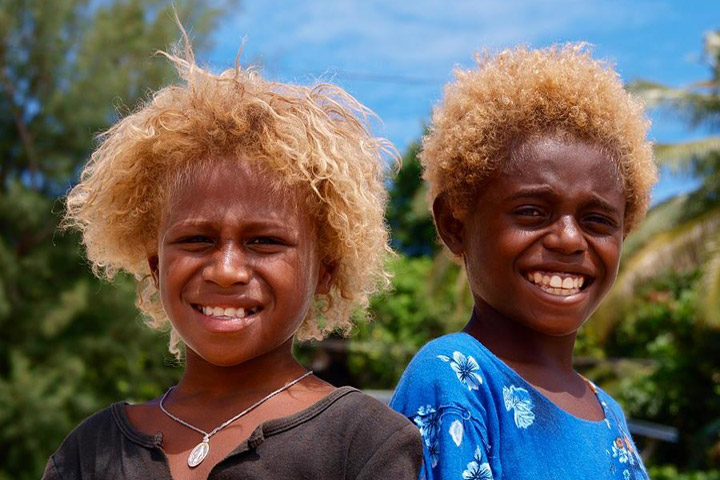 By Nightlight
/ in Interesting News,Interesting Things,Stories Behind the Photographs
/ tags interesting stories
0 Comments

About a quarter of the Melanesian population in the Solomon Islands archipelago has an extremely unusual trait – dark skin with blond hair. The archipelago, located east of Papa New Guinea in Oceania, consists of a thousand islands inhabited by over half a million Melanesians. Melanesians have the darkest skin in the world outside of Africa, but strangely, about one-fourth of the inhabitants sport blond afros. Blondness is more common in children than in adults, with hair tending to darken as the individual matures.

This rare Melanesian characteristic has baffled scientists and genetic experts for years. Up until now, they have attributed the trait to inheritance – from the Europeans, especially the British, German and Australians, who have been associated with the island for hundreds of years. Several of the islands were under German jurisdiction in the 19th century. In 1893, the UK took southern Solomon Islands under their wing, declaring the region a protectorate. The rest of the islands were added to the protectorate at a later stage. And in the early 20th century, Australian and British companies set up coconut plantations on many of the islands. So it isn’t entirely unbelievable that the dark-skinned Melanesians got their blond hair from the growing influx of ‘outsiders’. The locals, however, prefer not to go by that theory. They have been insisting for years that their blond hair is a result of a diet rich in fish and constant exposure to the sun. As it turns out, both theories are quite far from the truth. According to a recent investigation, random mutation might actually be the answer to the mystery of the Melanesian blonds.

Sean Myles, the author of the study and geneticist at Nova Scotia Agricultural College, pointed out that there is almost no variation in the shades of blond hair. This suggests that the hair color is governed by genes. “It looked pretty obvious to me that it was a real binary trait,” he said. “You either had blond hair or you didn’t.” To locate this underlying blueprint in the Melanesian genetic pool, Myles and his colleagues collected saliva and hair samples from over 1,200 Solomon Islanders. From these samples, they compared the genetic makeup of 42 dark-haired and 43 blond islanders. What the scientists discovered was pretty phenomenal – the two groups possessed very different versions of a crucial gene, TYRP1, which coded for a protein involved in pigmentation. Just switching one letter of the genetic code (a ‘T’ instead of a ‘C’), marked the difference between dark hair and blond hair. Only one amino acid in the protein is different (arginine replaced by cysteine). So 25 percent of the Solomon islanders carry two copies of the mutant recessive gene. That means the blonds could have inherited their hair color from both parents. “It’s a great example of convergent evolution, where the same outcome is brought about by completely different means,” said Myles. Jonathan Friedlaender, an anthropologist at Philadelphia’s Temple University, explained that the mutation probably arose by chance in one individual. It appears to have gained in frequency because the original population of the island was pretty small. Myles added: “If you can find a gene for blond hair that exists in Melanesia and nowhere else, then there’s no reason why those sorts of genes don’t exist all over the world in underrepresented populations, and affect not only hair pigmentation, but also disease-related traits.”

The study also traced the origins of the Melanesian people in an effort to understand the mutant gene. They discovered that while all humans outside of Africa have genes passed down from the Neanderthals, Melanesians are the only known humans with a different prehistoric ancestry. They are believed to have evolved from an interbreeding of the Denisova hominin, Neanderthal man’s distant cousin. So the islanders have slightly different genes, which gives them their unique blond hair.