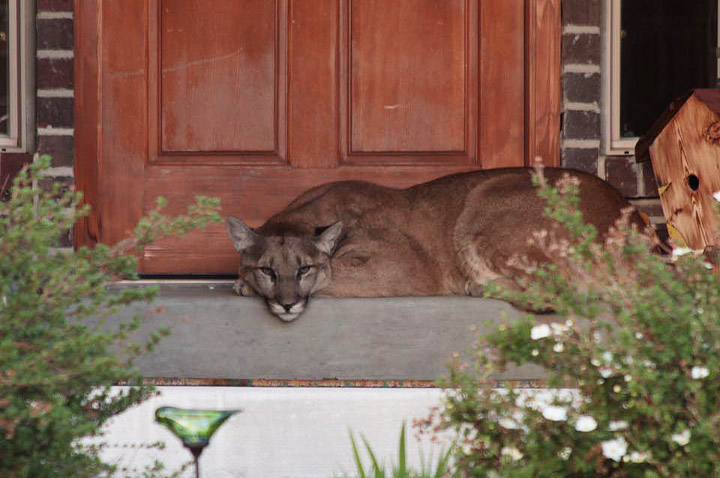 A Utah woman who spotted what she believed to be a dog napping on her porch quickly realized the animal was actually a young mountain lion.

Kathy Inman of Heber said she and her husband, Floyd, looked out a window Wednesday night and saw what appeared to be a yellow dog napping on their front porch. “So I looked down and I said, ‘what dog is that laying on my porch?’ and I tapped on the glass, and he or she turned around and I said, ‘that ain’t no dog,'” Inman told KSTU-TV.

The couple said the mountain lion spent about two hours on their porch. “It didn’t do anything, it just laid there,” Floyd Inman said. “We’ve been in the Park City / Heber area for 30 years, and I’ve never had one that close to me before.” Neighbor Rhett Riding captured photos of the lounging lion and posted them to Facebook.

“His eyes were closed, and then they were open, it was like he was kind of napping in between checking us out,” Riding said.

The cougar fled after being shot with the dart and was eventually located in a vacant lot. Wildlife officials said the big cat, a 2-year-old female weighing about 75 pounds, was kept overnight for observation and released back into the wild Thursday morning.