Perennial Plants to Cut Back or Prune in the Fall 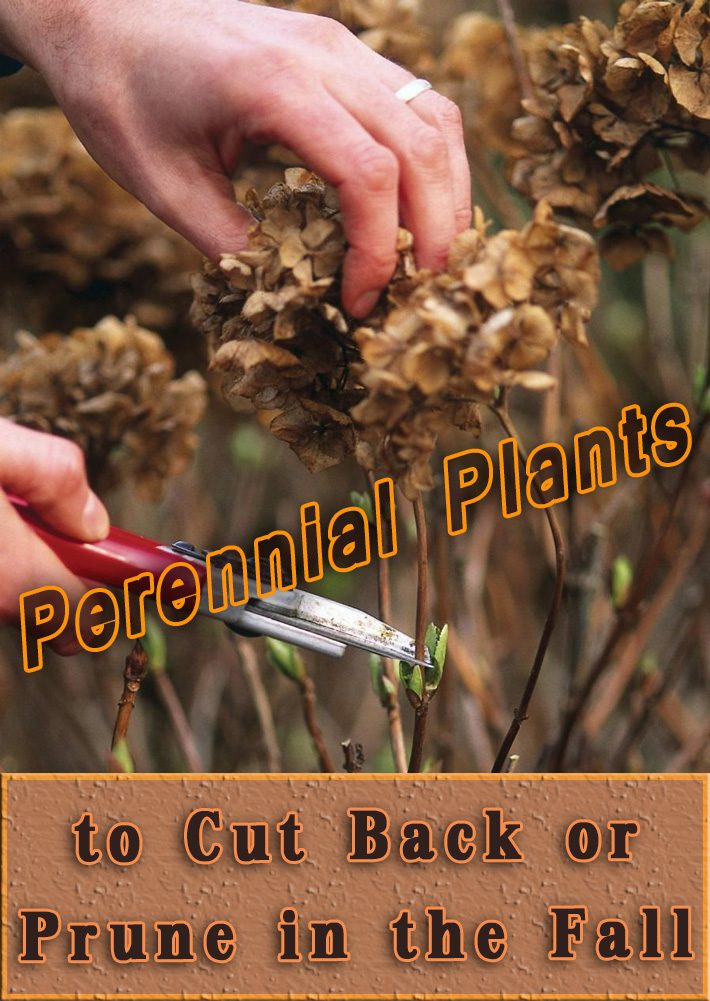 Perennial Plants to Cut Back or Prune in the Fall

While it’s tempting to cut back the whole flower garden in the fall, even in colder climates, it can be nice to leave some perennials standing throughout winter months. The seeds of Echinacea and Rudbeckia will attract and feed the birds: Sedum will hold onto snow like frosting. There are also plants that like the protection their foliage provides for their crowns. Asclepias (Butterfly Weed), Chrysanthemums and Heuchera (Coral Bells) fare best if cleaned up in the spring.

But some perennials don’t handle rough weather well. They won’t remain attractive after frost and they have recurrent problems with pests and diseases, which will over winter in their fallen foliage and surface in the spring. These perennial flowers are best cut down in the fall. If they are diseased, throw the foliage away, do not compost it.

No one can really pinpoint when frost and snow will come. Many gardens survive just fine with no attention at all in the fall. You will learn what works and what doesn’t, for your own garden. But it never hurts to take some time and put your garden to bed, in the fall.

Perennial Plants to Prune in the Fall

Bearded Iris The tall foliage of bearded iris begins flopping early in the season. By fall, it’s cover for iris borers and fungal diseases. Cut back after a killing frost and it would be wise to dispose of the foliage, rather than composting. (Zones 3 – 10) Blanket Flower (Gaillardia x grandiflora) Gaillardia is a pretty hardy plant, but cutting back the spent stems seems to improve its hardiness even more, by improving its vigor. (USDA Zones 3- 10)

Bronze Fennel (Foeniculum vulgare ‘Purpureum’) Bronze Fennel has increased in popularity lately and can be found accenting many gardens. The foliage provides food for swallowtail caterpillars, which can leave the stems completely stripped by fall. If that’s the case, they are no longer providing any useful service and can be cut back to the ground. (USDA Zones 5 – 9)

Beebalm (Monarda didyma) Even the most resistant varieties of Monarda can succumb to mildew. When that happens, you’ll be cutting them back long before fall. Fresh, new growth can be left on until spring. Sometimes selective thinning of the stems is all that is needed and you can leave the remaining seed heads for the birds. (USDA Zones 4 – 9) Blackberry Lily (Belamcanda chinensis) Prune to keep the foliage from collapsing and causing the crown to rot and to avoid borers. (USDA Zones 5 – 10)

Catmint (Nepeta ) Nepetas respond well to severe pruning throughout the season. The foliage will be damaged by winter cold and will need to be cut back anyway, so get a head start by pruning in the fall. (USDA Zones 3 – 8)

Columbine (Aquilegia) Remove any foliage showing leaf miner damage and remove any debris around the base of the plants. Aquilegia send out growth early in spring and appreciate not having the old foliage to contend with. (USDA Zones 3 – 9)

Corydalis (Corydalis lutea) It’s hard to kill Corydalis, but if you’d rather cut back on it’s enthusiastic spreading habit and it hasn’t been deadheaded during the summer, cut it back after a killing frost. (USDA Zones 5 – 7) Crocosmia (Crocosmia) The flowers of Crocosmia fall of naturally once blooming has finished and the seed heads can offer interest, but the foliage eventually heads downhill and there is nothing to be gained by leaving it up through winter.

Daylily (Hemerocallis) Daylilies respond well to shearing and unless you are in an area where they remain somewhat evergreen, fall pruning will save you a messy cleanup in the spring. (USDA Zones 3 – 9)

Golden Marguerite (Anthemis tinctoria) By late summer, Golden Marguerite daisies have finished blooming and are nodding off. Pruning to the crown will encourage new basal growth that helps protect and sustain them through the winter. (USDA Zones 3 – 7) Goldenstar (Chrysogonum virginianum) Often has problems with powdery mildew. If so, remove and destroy foliage in the fall. (USDA Zones 5 – 8)

Ground Clematis (Clematis recta) This is a clump forming clematis that blooms late summer into fall. It produces attractive seed heads, but when hit by a frost, it’s as slimy as wet petunias. Blooms on new growth, so don’t be afraid to clean it up in the fall. (USDA Zones 3 – 7)

Hardy Bergonia (Bergonia grandis) Frost will blacken and collapse the foliage of Bergonia. If left at the base of the plant, it can cause crown rot. Prevent this by cutting back in the fall. (USDA Zones 6 – 9)

Helianthus (Perennial varieties) H. x laetiflorus, H. salicifolium…) These perennial members of the sunflower family usually finish blooming toward the end of summer and go down hill from there. Deadheading does not improve their appearance and the tall stems are guaranteed to break and flop. Cut back to ground for aesthetics. (Zones 5 – 9) Ligularia (Ligularia dentata) is predominantly grown for its foliage, which turns to a dark mush after frost. Feel free to cut it back. (USDA Zones 4 – 8)

Lilyleaf Ladybell (Adenophora lilifolia) Can be cut back after flowering diminishes. Basel foliage will remain fresh until spring. (USDA Zones 4 – 8)

Masterwort (Astrantia major) Masterwort is often deadheaded throughout the summer, to prolong the bloom time. If conditions are dry, the foliage will begin to yellow and it can be sheared to the crown. Allow the new growth to remain through the winter. If no yellowing occurs, leave the plants for spring cleaning. (USDA Zones 4 – 7) Meadow Rue (Thalictrum aquilegiifolium) Performance wise, it doesn’t really matter when you cut back Meadow Rue. But since it’s done flowering for the season, pruning in the fall is one less thing to do in the spring. However, some varieties will self-seed. If that’s desirable, let it go until spring. (USDA zones 5 – 8)

Mountain Bluet (Centaurea montana) Mountain bluets tend to become black and unsightly with the first frost and can be cut back in the fall. However, if you sheared them back in late summer and only basal growth is present, you can allow that to remain. (USDA Zones 3 – 8)

Painted Daisy (Tanacetum coccineum) Painted Daisies can easily rot in wet soil. Prune in the fall to prevent the foliage from flopping over onto itself and acting as a mulch. (USDA Zones 3 – 7)

Penstemon (Penstemon barbatus) Penstemon don’t like wet feet and should be planted a little higher in the ground than most plants. The foliage usually declines toward the end of summer and can be trimmed back, inducing new basal growth that is sufficient to mulch the plants through winter. Allowing the older, tall growth to flop would hold too much moisture around the crown. (USDA Zones 5 – 9) Peony (Paeonia) Peonies need a period of cold to set buds for the following season. That coupled with the fact that their foliage is extremely prone to mildew is reason enough to remove the foliage in the fall. Infected foliage can be removed and disposed of in late summer. Healthy foliage will turn golden in fall and can be removed once it has turned to mush, after the first frost. (USDA Zones 3 – 8)

Perennial Sunflower (Helianthus) By this time Helianthus foliage isn’t a standout to begin with and by the time the flowers have faded, it’s also time to cut the plants down. (USDA Zones 4 – 9)

Phlox (Phlox paniculata) Phlox is prone toward powdery mildew. Even the resistant varieties can become infected in bad weather. If so, prune and destroy all foliage and stems in the fall. (USDA Zones 4 – 8)

Plume Poppy (Macleaya cordata) Try and kill a Plume Poppy, I dare you. Cut these back before they go to seed or you will have Plume Poppies EVERYWHERE. (USDA Zones 3 – 8) Salvia (Salvia nemorosa) Perennial Salvia benefits from several prunings during the growing season. In fall when blooming slows, cut the whole plant back to the new basal growth. (USDA Zones 3 – 8)

Siberian Bugloss (Brunnera macrophylla) Although it’s not necessary, since Brunnera is an early riser in the spring and its foliage will turn black and unattractive with the first frost, fall clean-up is preferable. (USDA Zones 3 – 8)

Sneezeweed (Helenium autumnale) Helenium usually doesn’t finish blooming until mid-fall, but by that time it is often covered with mildew. The foliage can be cut back and removed before winter. (USDA Zones 3 – 8) Solomon’s Seal (Polygonatum odoratum) Although listed here, Solomon’s Seal pretty much disappears on its own, after a frost or two. Certainly the leaves will drop. If the stems remain, they can be pruned back to the ground. (USDA Zones 3 – 9)

Veronica / Spike Speedwell (Veronica spicata) As flowering ceases, the plants can be sheared to the ground. They will only turn black and ugly if left until spring. (USDA 3 – 8)

Wild or False Indigo (Baptisia australis) Baptisia is one of those plants that splits in the middle if not sheared back after pruning, however many gardeners like the seed pods and simply stake the plants. Come frost, the foliage turns black and even staking isn’t going to help its appearance. Cut back for aesthetics. (USDA Zones 3 – 9)

Yarrow (Achillea) Achillea don’t like to sit in cold, wet soil. By fall, most of their blooms are spent and the foliage is flopping and possibly diseased. Cut back in early fall and new basil growth with fill in before frost. (USDA Zones 4 – 8) All About Butterfly Garden 6 years ago