Top 10 Stinkiest Cheeses in the World 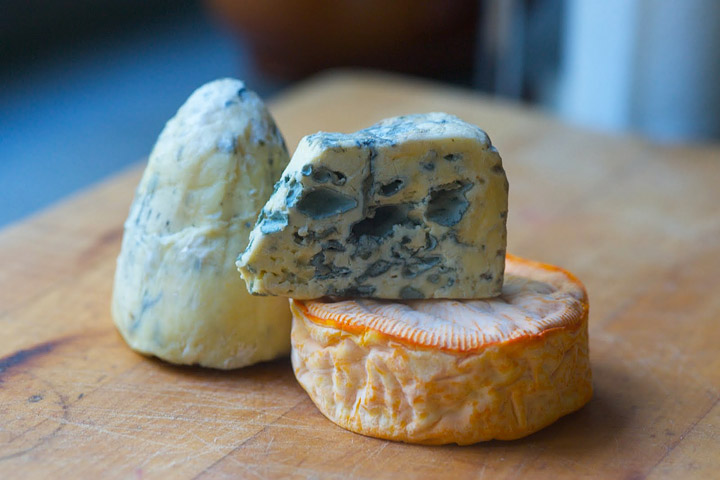 Do you enjoy notes of body odor and dirty socks with hints of sour laundry and wafts of barnyard with your comestibles? If so, this is the list for you.

Although many cheeses may have a bit of pungency about them, it’s the washed-rind family that takes top honors in the stinky cheese division. During the aging process, the rinds of these cheeses are rinsed — with anything from brine to brandy, wine, beer or even pear cider — which works to inhibit mold and encourage the growth of friendly bacteria. The bacteria, Brevibacterium linens, is what gives the rind its aroma; it just so happens that B. linens is also the very same bacteria responsible for making feet stink.

Fortunately, although some of the pungency permeates the cheese itself, most of it remains in the rind, leaving a soft-ripened or semi-firm cheese within that is usually milder in flavor than a pair of fetid feet.


In the who’s who of stinky cheeses, the following washed rind varieties rank among the world’s most malodorous. Here is a list of the Top 10 Stinkiest Cheeses in the World. It’s not the prettiest cheese to look at but, unlike most stinky cheeses, Taleggio really doesn’t smell so bad. Appreciated for its strong taste and soft texture, this Italian cheese is becoming more and more popular on a national level and it’s even getting ready to make its debut on foreign markets. Blue Stilton has been called the king of English cheeses on more than one occasion and if you subscribe to “the smellier the better” school, you’ll definitely want to try it. The texture of this British cheese varies from hard and crumbly to very soft, almost butter-like, depending on how mature it is. The older the cheese the softer and smellier it is. One of the oldest types of cheese in the world, Stinking Bishop dates back to the time of the Cictercian monks. It’s produced out of pasteurized Gloucestershire-cow’s milk and then washed with Stinking Bishop Pear juice, which makes the rind orange and really sticky. Mainly produced in Germany, Limburger is perhaps the most popular of all smelly cheeses. It is fermented using Brevibacterium linens, a bacterium partly responsible for the smell of the human body. As a result, when people say limburger smells like human feet they are scientifically correct. One of the most sought-after cheeses on the planet, Roquefort was banned in countries like Australia and New Zealand until recently. Produced out of raw sheep’s milk and matured in caves around the small village of Roquefort, Southern France, this stinky dairy product is as dangerous as it is tasty. Because the milk is not pasteurized, there is a risk of listeria infection, which can be deadly for some people and could cause pregnant women to lose their babies. Just for the record, this is not the kind of pasteurized-milk Brie that you can find on the American market. We’re talking about the original, raw cow’s milk Brie that the French love so much. It’s a very creamy cheese, covered by a thick, white mold crust which true cheese-connoisseurs say should be eaten, not thrown away. One of Napoleon’s favorites, Epoisses is definitely one of the smelliest cheeses you can find. Just so you get an idea of its repulsive odor, you should know that Epoisses has been banned from public transportation vehicles all over France. It is made from raw cow’s milk and its rind is washed with pomace brandy. This French cheese is often called “Monster Cheese” due to its unbearable odor. It comes from the French region of Alsace where it’s produced from raw cow’s milk and left to mature in damp cellars. Its rind is washed regularly with salted water. Rich in chemicals like ammonia, sodium chloride and succinic acid, Camembert de Normandy smells like the secret project of a chemical company. Made from unpasteurized cow’s milk and left to mature for 3 weeks, Camembert is a soft, runny cheese normally eaten with a spoon. This smelly French delicacy is one of the oldest known types of cheese, dating back to the 13th century. To be honest, it smells like it’s that old too. This is the kind of food you want to keep wrapped-up in the fridge, unless you want everything else smelling like it.

Pokemon Go: 8 Weirdest Incidents (So Far)! 4 years ago
← Foods to Avoid During Pregnancy
7 Facts About Depression That Will Blow You Away →