10 Oldest Buildings in the World 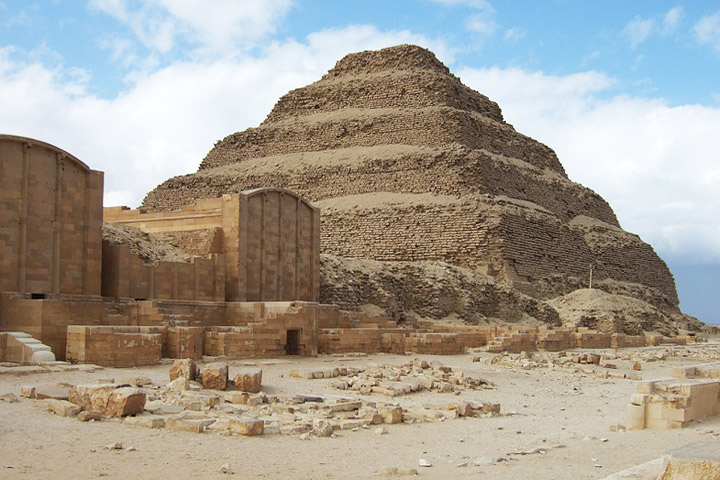 Building is defined as any human-made structure used or intended for supporting or sheltering any use or continuous occupancy. This article attempts to list the 10 oldest extant freestanding buildings constructed in the world which are the masterpiece of the skill and handwork of the people of that era. Today we become astonished to see these wonders that in so remote ages without any modern technology and machine how so great construction were made. Dhamek Stupa is a massive stupa located at Sarnath, 13 km away from Varanasi in the state of Uttar Pradesh, India, was built in 500 CE to replace an earlier structure commissioned by the great Mauryan king Ashoka in 249 BCE, along with several other monuments, to commemorate the Buddha’s activities in this location. Stupas originated as circular mounds encircled by large stones. King Ashoka built stupas to enshrine small pieces of calcinated bone and other relics of the Buddha and his disciples. An Ashoka pillar with an edict engraved on it stands near the site. The ‘Great Stupa’ at Sanchi is the oldest stone structure in India and was originally commissioned by the emperor Ashoka the Great in the 3rd century BCE. Its nucleus was a simple hemispherical brick structure built over the relics of the Buddha. It was crowned by the chatra, a parasol-like structure symbolising high rank, which was intended to honour and shelter the relics. It has four profusely carved ornamental gateways and a balustrade encircling the whole structure. The construction work of this stupa was overseen was Ashoka’s first wife, Samragyi (Empress) Vidisha Devi herself. The Thracian Tomb of Kazanlak is a vaulted brickwork “beehive” tomb near the town of Kazanlak in central Bulgaria. The tomb is situated near the ancient Thracian capital of Seuthopolis. The tomb is part of a large Thracian necropolis. It comprises a narrow corridor and a round burial chamber, both decorated with murals representing a Thracian couple at a ritual funeral feast. The monument dates back to the 4th century BCE and has been on the UNESCO protected World Heritage Site list since 1979. The Parthenon is a temple on the Athenian Acropolis, Greece, dedicated to the maiden goddess Athena, whom the people of Athens considered their patron. Its construction began in 447 BC when the Athenian Empire was at the height of its power. It was completed in 438 BC, although decoration of the building continued until 432 BC. It is the most important surviving building of Classical Greece. The Parthenon is regarded as an enduring symbol of Ancient Greece, Athenian democracy, western civilization and one of the world’s greatest cultural monuments. The palace of Knossos was the ceremonial and political centre of the Minoan civilization and culture.The palace was excavated and partially restored under the direction of Arthur Evans in the earliest years of the 20th century. Its size far exceeded his original expectations, as did the discovery of two ancient scripts, which he termed Linear A and Linear B, to distinguish their writing from the pictographs also present. The palace was abandoned at some unknown time at the end of the Late Bronze Age, ca. 1380–1100 BC. The occasion is not known for certain, but one of the many disasters that befell the palace is generally put forward. The abandoning population were probably Mycenaean Greeks, who had earlier occupied the city-state, and were using Linear B as its administrative script, as opposed to Linear A, the previous administrative script. Also known as the Pyramid of Khufu is the oldest and largest of the three pyramids in the Giza Necropolis bordering what is now El Giza, Egypt. It is the oldest of the Seven Wonders of the Ancient World, and the only one to remain largely intact. Egyptologists believe that the pyramid was built as a tomb for fourth dynasty Egyptian Pharaoh Khufu over a 10 to 20-year period concluding around 2560 BCE. Initially at 146.5 metres (481 feet), the Great Pyramid was the tallest man-made structure in the world for over 3,800 years. Located in Saqqara necropolis, Egypt, The Pyramid of Djoser was built during the 27th century BC for the burial of Pharaoh Djoser by Imhotep, his vizier. This first Egyptian pyramid consisted of six mastabas built atop one another. The pyramid originally stood 62 metres tall, with a base of 109 m × 125 m and was clad in polished white limestone. The step pyramid is considered to be the earliest large-scale cut stone construction. The oldest known unworked stone pyramid structure dates to 3000 BC in the city of Caral, Peru. The Tarxien Temples are an archaeological complex in Tarxien, Malta. They date to approximately 3150 BC. The site was accepted as a UNESCO World Heritage Site in 1980. The Tarxien consist of three separate, but attached, temple structures. The main entrance is a reconstruction dating from 1956, when the whole site was restored. At the same time, many of the decorated slabs discovered on site were relocated indoors for protection at the Museum of Archaeology in Valletta. The first temple has been dated to approximately 3100 BC and is the most elaborately decorated of the temples of Malta.

La Hougue Bie is a historic site, with museum, in the Parish of Grouville, Jersey. This site was in use around 3500 BC. The site consists of 18.6 metre long passage chamber covered by a 12.2 metre high earth mound. The site was first excavated in 1925 by the Société Jersiaise. In Western Europe, it is one of the largest and best preserved passage graves and the most impressive and best preserved monument of Armorican Passage Grave group. During World War II it was used as a key lookout point, and an underground command bunker was built in the mound and adjacent.

The Tumulus of Bougon or Necropolis of Bougon is a group of five Neolithic barrows (Tumulus A,B,C,D,E,F) located in Bougon, France. Their discovery in 1840 raised great scientific interest. To protect the monuments, the site was acquired by the department of Deux-Sèvres in 1873. Excavations resumed in the late 1960s. The oldest structures of this prehistoric monument date to 4800 BC.