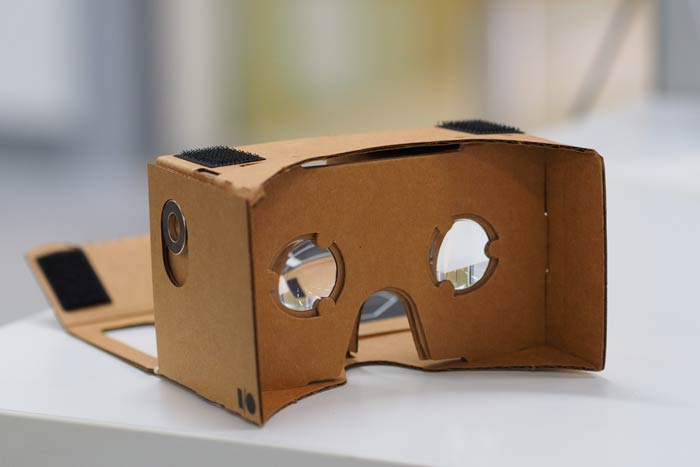 Google Cardboard looks like a set of big square goggles. Stick your iPhone inside and with the right app, you can see images in three-dimensional virtual reality. Doctors at Nicklaus Children’s Hospital in Miami used the device to map out an operation they say they couldn’t have envisioned otherwise.

Twenty-four hours after giving birth to twin girls in August, Cassidy Lexcen was told by doctors to prepare to lose one of her babies. Teegan Lexcen was born with just one lung and hypoplastic left heart syndrome – a complex and rare heart defect that leaves the left side of the heart critically underdeveloped. Doctors in the Lexcen’s home state of Minnesota deemed the condition inoperable.

“It was devastating. We just shut down when we heard that. We took her home and prepared for the worst.”

Cassidy says she and husband Chad Lexcen chose to cherish every day they had with baby Teegan and her healthy sister Riley. Then something unexpected happened.

“We started to see her go from this small newborn that was a little on the weak side to actually showing signs of vitality,” Cassidy says. “That’s when we felt like, ‘Hey, maybe something else is going on inside of her and we should check this out.’ Why would we not try when she was doing as well as she was doing?”

Inspired by Teegan’s fight, Cassidy and her extended family began searching for doctors who could offer a new approach. As the result of these efforts, Teegan’s case was presented at a cardiac team conference at Nicklaus Children’s Hospital in Miami, Florida, in November.

Missing one lung and half a heart

Three times a week, 30 cardiac doctors and nurses sit in a room at Nicklaus Children’s Hospital and discuss the treatment road maps for their patients and for children who might become their patients. “The arc of people’s lives get determined in these conferences,” Burke said.

On a Wednesday morning in November, they looked at pictures of Teegan’s heart.

“When we all looked at her X-ray, everybody in the room was kind of stunned she was still alive,” Dr. Redmond Burke, Chief of Cardiovascular Surgery at Nicklaus, says.

“You could see she had one lung and her heart was pushed into her left chest – that’s a lethal combination.” Burke asked Dr. Juan Carlos Muniz, a pediatric cardiologist who specializes in imaging, to make a 3-D model of Teegan’s heart. It had helped in complicated cases before. A few hours later, Muniz reported bad news: Their 3-D printer was broken. “Technology always goes on the fritz at the worst possible time,” he lamented.

But it turned out to be the best possible time, because it forced Muniz to come up with an option that worked better. He’d been chatting with Dr. David Ezon, a pediatric cardiologist at the University of Pittsburgh Medical Center, about using virtual reality — mainly used for playing video games — for children’s hearts.

After that discussion, Muniz bought a Google Cardboard device and had been playing with it in his office. With the broken printer, now was the time to use it for real, he decided. Using an app called Sketchfab, Muniz downloaded images of Teegan’s heart onto his iPhone and showed them to Burke.

They were similar, yet different from 3-D images they’d been using on computer screens. With the goggles, it was possible to move around and see the heart from every angle — to almost be inside the heart checking out its structure. Burke looked through the Google Cardboard, and visualized what he could do to fix Teegan’s heart.

Making the difference between life and death

On December 10, 4-month-old Teegan lay on an operating table in Miami. The first challenge was how to get to her heart.

Normally, the heart is in the center of the chest, and to access it doctors make what’s called a midline incision, cutting from the top to the bottom of the breastbone. But Teegan’s heart wasn’t normal. It was far to the left side of her chest.

Before using Google Cardboard, Burke feared he would have to make what’s called a clamshell incision, which is a midline incision plus another cut going from the center of her chest all the way to the left side.

“It’s massive trauma to a baby — it’s just horrendous,” Burke said. He was worried Teegan wouldn’t survive it. “She was dwindling away. She’d been slowly dying for three months,” he said.

That’s where Google Cardboard proved advantageous over 3-D printing. The printer would have given Burke just her heart — but to access her heart surgically, he needed to be able to visualize it in context with her ribcage and other structures. With the use of the virtual image, Burke figured out a way to do just the normal midline incision and spare her the dreaded clamshell cut.

“The right ventricle is the wimpier, weaker ventricle, and if ventricles could talk, it would say ‘I can’t do this. I’m not designed for this job,'” Burke said.

The usual surgeries on children with only one ventricle wouldn’t work on Teegan because of her unique defects and anatomy. Using the virtual image, Burke invented a new surgery, shoring up and rerouting her one ventricle so it could do the work of both ventricles long term. Figuring all this out was something he had to do before he actually opened her up — every minute wasted in the operating room trying to map out a plan puts a baby at higher risk for heart and brain damage.

The night before Teegan’s surgery, Burke lay in bed imagining her heart based on the Google Cardboard image, mapping out the precise steps he would take in the operating room.

When he opened her up the next day, her heart was exactly the same as the image. He proceeded with no surprises. “Sometimes that’s what makes the difference between life and death,” he said.

This ‘Vampire’ Hedgehog Is Instagram’s Newest Star 5 years ago