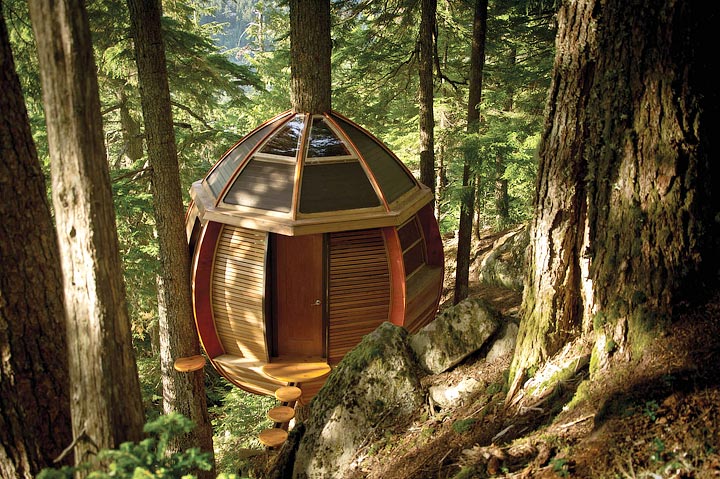 Former Canadian software developer and current carpenter Joel Allen built a unique egg-shaped tree house, The HemLoft. It is located in the woods near Whistler, British Columbia. The exact location of the house is a secret though, because Allen built it on Crown lands – government property – without permission. Allen had to hand-carry all of the materials out to the site and carry the construction waste back out. The HemLoft is a treehouse in the truest sense: the entire weight of the egg-shaped structure is supported by the tree around which it is built.

It hangs on a precipitous slope, in a towering stand of hemlocks, about a five minute walk from the nearest road. The story of how it came to be and the future of HemLoft is a fascinating tale.


After graduating with a degree in software development in 2003, Joel went to work for a start-up company that would eventually fold in 2006. Jobless and without direction, he met ‘Old Man John’ in the spring of 2008 at a festival. A self-taught caprpenter, Old Man John would inspire Joel to pursue his passion for carpentry. Joel decided to trade the keyboard and mouse for a hammer and nail. When Joel first began his foray into carpentry he was living out of his car. On a random job site he met a friend who was also an outdoor-adventure type (and also living out of his car). They quickly bonded and got into a pastime they called ‘sport sleeping’ which involved outdoing each other by sleeping in outrageous places outside (e.g., inside a hollowed out log). This pastime led Joel to want his own little place in the woods. Joel mentioned the idea of a loft in the woods to his friends Mark and Jayne who casually suggested the shape of an egg. It was at that moment that the HemLoft took its form. The design was based on triangular strength (with one side of the traingle curved). To test the design, Joel built a scale-model 1/4 the size. After tweaks and alterations to the proportion the final model was slightly fatter than a pure-egg shape to create a more spacious interior. With the design set, the next challenge was to find the perfect tree. Joel had an informal checklist of requirements for the perfect tree:

When Joel finally found ‘the tree’ it shot out of a 45 degree slope, was remarkably straight, perfectly proportioned and nearly bare of branches up to the sweeping canopy sixty feet above the forest floor. In 2010 Joel would find his life partner Heidi, and together they would complete the HemLoft. With an extra pair of hands and a new partner with an eye for design and carpentry skills to match. Together Heidi and Joel finally completed the HemLoft in August of 2011. The pictures seen in this post were taken by the couple and shared in a 21-picture gallery on Flickr, which you can find here. Photos by Heidi and Joel Allen

Thanks for sharing this!
← Rolling a Lawn – How and When to Do It
High Blood Sugar Symptoms →