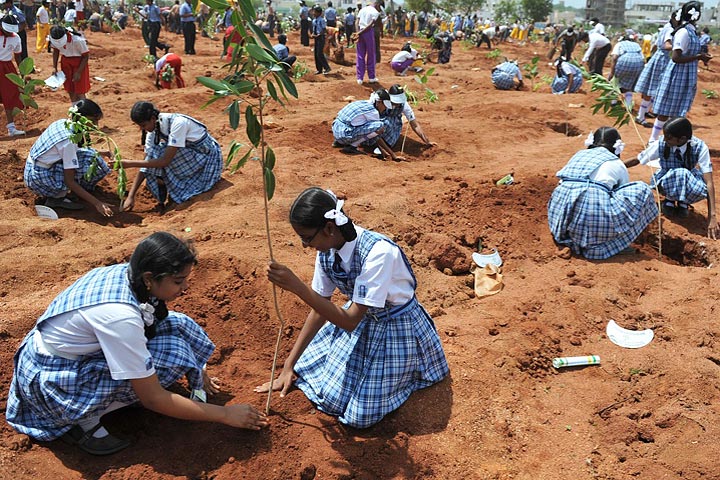 The smoggy cities of India are suddenly looking a lot greener, with just under 50 million trees having been planted in India in a record-breaking attempt to raise awareness of conservation.

The event took place on Monday in Uttar Pradesh, one of India’s most populous states found in the north of the country. More than 800,000 people from all walks of life, ranging from students and housewives to government officials, planted 49.3 million tree saplings in just 24 hours. The saplings included 80 different species of trees were from 950 different nurseries around the state.

Pakistan previously held the record, after planting 847,275 trees in 2013, but India’s attempt earlier this week has already been certified by the Guinness Book Committee as the new title-holder. This mass-planting event is to raise awareness of the government’s colossal nation-wide plan to make India green again. At the Paris Climate Change Conference, India pledged to increase forest cover to 95 million hectares (235 million acres) by 2030. India’s government is putting forward $6.2 billion for this effort.

“The world has realized that serious efforts are needed to reduce carbon emissions to mitigate the effects of global climate change,” Chief Minister Akhilesh Yadav told volunteers at the event, Associated Press reports.

Due to the country’s massive boom in population and rapid industrialization, India is notorious for its poor air quality. A recent report revealed that six Indian cities – Gwalior, Allahabad, Patna, Raipur, Ludhiana, and Delhi – were among the top 10 most polluted cities in the world, potentially leaving millions of people in India at serious risk of cardiac and respiratory diseases.

10 Destructive Habits That Unhappy People Have 6 years ago
← Sources of Minerals
What is the secret of East African distance runners? →